I’m unusual among ghostwriters because I’ve published two narrative nonfiction books of my own with traditional publishers. This means I know how to take the raw materials of a story and mold them into a coherent narrative. A good book isn’t just a collection of facts. Or the recitation of “one damn thing after another.” A good story is infused with drama and meaning. And I can do that. 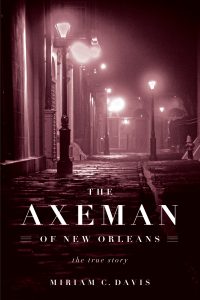 The Axeman of New Orleans: The True Story is a true crime thriller, the story of a killer who stalked the streets of New Orleans in the early 20th century. The Axeman repeatedly broke into the homes of Italian grocers in the dead of night, leaving his victims in a pool of blood. Iorlando Jordano, an innocent Italian grocer, and his teenaged son Frank were wrongly accused of one of those murders; corrupt officials convicted them with coerced testimony. Only thirty years after Jack the Ripper stalked the streets of Whitechapel, the Axeman of New Orleans held an American city hostage. This book tells that story.

For more on the Axeman, go to AxemanofNewOrleans.com.

What readers and reviewers say about The Axeman of New Orleans:

“Tackling one of the most perplexing serial killer cases in the annals of American homicide, Miriam Davis has produced an exemplary work of historical true crime. Exhaustively researched, crisply written, and as briskly paced as any fictional thriller, it is sure to stand as the definitive work on the subject.” — Harold Schechter, author of The Serial Killer Files

“No American murders are stranger or more mysterious than those committed by the Axeman of New Orleans. And none are more desperately in need of the attentions of a first-rate writer and historian. Thankfully, Miriam Davis is both those things. Her account is original, revelatory—and also very exciting.” — Mike Dash, author of The First Family and Satan’s Circus

“Dr. Miriam Davis leaves no stone unturned in her study of a classic unsolved serial murder case, pursuing leads where no researcher has gone before, revealing previously unreported crimes, victims, and suspects. Those who think they “know it all” about the Axeman are in for a thrilling surprise.” — Michael Newton, author of The Encyclopedia of Serial Killers and Silent  Rage: Inside the Mind of a Serial Killer

“A riveting story of a serial-killer investigation in a time long before modern-day investigative techniques, or even the term ‘serial killer,’ was invented.” — David Pitt, Booklist STARRED REVIEW

“[T]he book reads like a modern-day thriller. . . . Using police documents, newspapers and other source material of the day, she follows the killer’s trail as he moved through New Orleans, DeRidder and Lake Charles. . . . The last quarter of the book is devoted to the highly emotional and legal arc (think To Kill a Mockingbird) of the father-and-son duo falsely accused of one of the Axeman’s crimes, Iorlando and Frank Jordano.” — Amanda Orr, Louisiana Life

“Davis REALLY did her research for this book, delving deep into NOLA records . . . and presents a true cold-case with no true clear suspect(s). . . . Davis gives a riveting page turner, that takes the facts of the cases and offers possible scenarios and events leading up to the crimes, that make them all the more horrific, for their unsolvability.” —http://blesstheirheartsmom.blogspot.com/2016/11/history-corner-book-review-axeman-of.html

“What a wonderful read! If you like intrigue, crime, deception, twists, corruption, truth that is sometimes more bizarre than fiction and all of that told in good old-fashioned, crisp, straight-up writing, then the Axeman of New Orleans is a must. This book is fantastically researched, detailed to the tee, beautifully paced and full of surprises. Miriam Davis has done a wonderful job in tackling the true account of the New Orleans serial killer from the 1900’s. I had never heard of the Axeman in any context before now but her vivid prose and wonderful storytelling kept me flipping page after page.” — Jimmy K., Amazon review

“The stuff of Criminal Minds. The strange story of a serial-killer and lots of flavor of New Orleans a century ago. . . . The tension of false accusations and a “miracle” that saved the condemned—all recounted with great suspense. . . . [T]he whole story is laid out and the right questions raised. Read this book through in one day. A real page-turner!” — Ann D.H., Amazon review

“Miriam Davis tells a compelling story based on meticulous research on the victims, the accused and the local authorities. The term ‘serial killer’ had not been invented when the crimes occurred. . . . The grisly deaths of the hard-working Italian immigrant grocers and their family members have never been officially solved and Dr. Davis offers a well thought out and plausible explanation. I found myself thinking about the condition of our outside doors and window locks as each story unfolded.” — BOOKCHC, Amazon review

“Even though it is factually written it also is written in a way that gives life to the characters. You will be looking over your shoulder and checking the locks on your doors while reading this!” — Francine, Amazon review 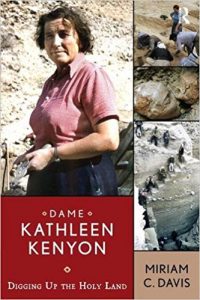 Dame Kathleen Kenyon: Digging Up the Holy Land is the biography of one of the great archaeologists of the 20th century. Beginning her archaeological career on an all-woman expedition to the Great Zimbabwe in southern Africa in 1929, Kenyon went to Jericho in the 1950s to find the walls famously brought down by Joshua. But her excavations instead pushed back the accepted date of town life by at least 2000 years, as well as uncovering 8,000-year-old Neolithic portrait skulls—the oldest known examples of realistic human portraiture at that time. In Jerusalem in the 1960s, she uncovered the earliest site of the city, the biblical City of David. Her work in Jordan and Israel was responsible for spreading the Wheeler-Kenyon digging method to the Middle East, where it revolutionized archaeology.

What readers and reviewers say about Dame Kathleen Kenyon:

“Miriam Davis has written a critical yet colorful biography of Dame Kathleen Kenyon, one of the legendary figures in the archaeology of the Holy Land. Drawing on extensive archival work and scores of personal interviews, she charts in detail Kenyon’s early struggle as a lonely woman in a man’s field; her extraordinary life on the digs she dominated at Samaria, Jericho, and Jerusalem . . . and her flamboyant personal style. As someone who knew Dame Kathleen well . . . I can attest that Davis has successfully captured the persona of this remarkable woman, with all her peculiarities, yet with full appreciation of her genius. A splendid accomplishment!” — William G. Dever, Professor Emeritus of Near Eastern Archaeology, University of Arizona

“Miriam Davis has done a terrific job describing not only “K’s” archaeological career, but also the great influence she had upon her professional associates, students, and many friends. . . . This biography sheds much light on Dame Kathleen’s attempts to excel in ground breaking new archaeological techniques, which she honed while working with the legendary Sir Mortimer Wheeler on roman sites in the British Isles. This training allowed her to apply her knowledge to the excavation and study of foreign ancient sites in diverse locations that included southeast and North Africa, as well as the famous biblical sites at Samaria, Jericho, and Jerusalem, which produced many new and marvelous discoveries.” — Thomas Holland, Oriental Institute, University of Chicago

“Kathleen Kenyon was the outstanding woman archaeologist of the twentieth century. . . . In this penetrating biography of ‘K’, as she was known to friends, students and colleagues, Miriam Davis has written the definitive account of K’s life of action and scholarship in England and the Middle East. Never shirking the difficulties, academic, political, personal, Davis offers balanced judgments, drawing a portrait true to those of us who knew K and owed her so much.” — Martin Biddle, Oxford University

“Miriam Davis’ book captures the full life of an extraordinary woman. In addition to describing K’s career, it gathers detailed information and testimonials from those who knew her to form a colorful and insightful life story about an incredibly influential dame of archaeology.” — Hana Koriech, Archaeology

“The author of this biography deserves all praise. It is based on thorough research including both oral and written sources. It is quite readable and avoids many of the pitfalls common in such monographs.” — Magen Broshi, Biblical Archaeology Review

“All too often, academic biographies fail to strike a balance between detailing the personal life of the individual and explaining the intellectual context of their activities. Fortunately, Miriam Davis’ biography of Kathleen Kenyon is an exception . . . this reviewer finished the book with the satisfying sense of having been both educated and entertained.” — Naomi Farrington, Archaeological Review from Cambridge.

“Dame Kathleen Kenyon: Digging Up the Holy Land is well written, well researched, entertaining and informative. Instead of just technical work, you are also able to learn about Dame Kenyon the person. At the same time, this book provides enough inside information and advanced knowledge that professionals in the field will find it helpful, interesting, informative and must read material. Dig on Davis’ Dame Kathleen Kenyon: Digging Up the Holy Land and find yourself in a holistic reading and learning experience!” — S. M. Wagoner, Amazon review

“A careful reader will garner much more from the read than just a biographical encounter; there is history, both ancient and modern, sociology in her professional relationships, and cultural studies through an English woman working domestically and abroad. This is an endearing book to read curled up in a warm blanket.” — Dusk, Amazon review